and pay the member rate for meetings and symposia. Note: Credit card payment is available only on line, not by fax or mail. 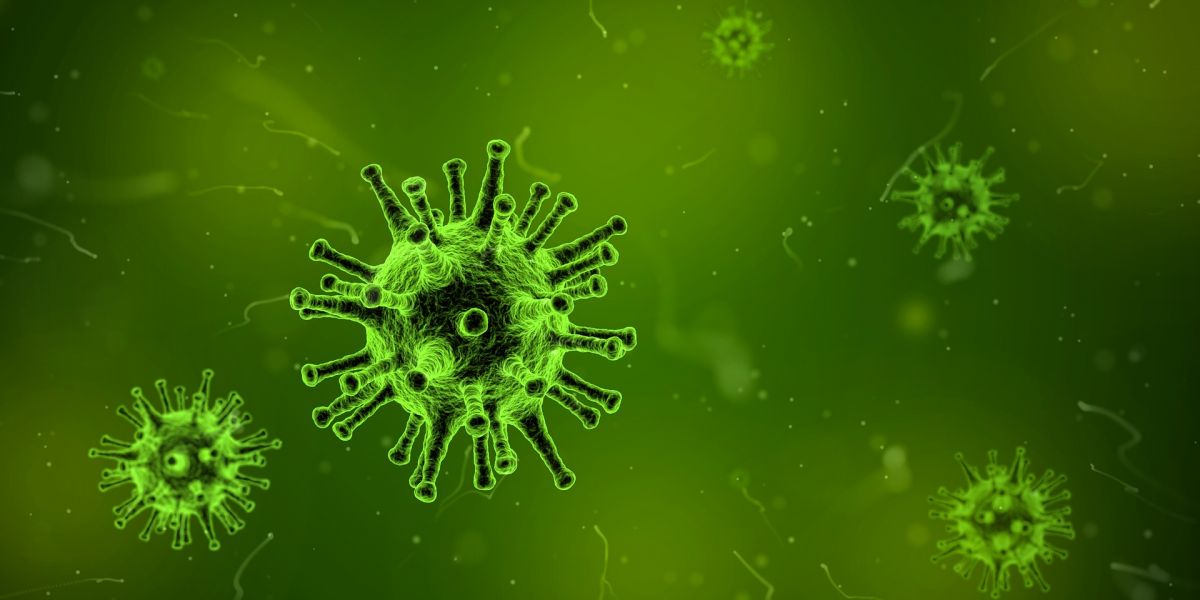 Introduction
In the last 10 years, biosimilar regulatory guidelines have evolved significantly in Canada, the European Union (EU) and the United States of America (U.S.). Anchored on the patent expiration date, there is a wave of biosimilars development in Western countries as well as other countries – all demanding cheaper versions of biologic medicines for their citizens.  Notable examples include India and China in the Asia Pacific region. Since the first biosimilar was approved in Europe in 2006, sponsors of biosimilars have accumulated varied expertise with regards to the development of biosimilars: biologic versions of expensive medicines that are similar in terms of quality, safety and efficacy to an already licensed reference product.  Doctors and patients are increasingly being educated about biosimilars and about the potential for substantial cost savings. Health Authorities in multiple jurisdictions have established regulatory requirements to ensure that biosimilars are safe, efficient and of high quality.  Despite progress over the last decade, the uptake of biosimilars is still slower than patient demand.  The reasons for this is complex and involves strategies by the innovators to protect their lucrative franchises, the complexity of successfully manufacturing a copy of a biologic product, the net present value analysis of a sponsor’s product in relationship to the pipeline, the capital required to run the clinical studies required for registration and an ever-evolving regulatory affairs landscape.  This paper will focus on the regulatory requirements that have resulted in the current biosimilars landscape and discuss how this pipeline was impacted by regulatory requirements in Canada, EU and the U.S.

Current Biosimilar Landscape and Biosimilars Development
As of December 2016, there were six biosimilar approvals in Canada, twenty-three biosimilars approved in the EU, and four approved in U.S., though only one of these products was launched (Zarxio™).  These numbers are disappointing considering a timespan of drug development surpassing a decade. As a comparison, consider that since 1999, the FDA approved 1,002 generic drugs[i]. This translates into roughly 589 approvals in 10 years.  We know that biosimilars are more complex – and require much bigger analytical and clinical comparative studies when compared with small molecule generic drugs, but many patients and doctors would still like to see faster access to these alternative and affordable treatments.

Looking at the history of biosimilars approvals, it was anticipated that the first cohort of biosimilars were the simplest biological drugs, such as somatropin, epoetin and filgrastim. Following by the development and approval of more complex biosimilars, like monoclonal antibodies, such as infliximab, etanercept and adalimumab, see Table 1 below with the summaries of biosimilars approval in Canada. EU and USA.  Due to the significant advances in biotechnological manufacturing processes – some techniques are even more accurate or sensitive than the analytic methodology used for approval of the originator, the complexity of biologic manufacturing is becoming less of a hurdle to registration. Companies like Sandoz, Amgen and Celltrion all now have extensive expertise and proven that they can successfully overcome the manufacturing challenges of biosimilars development as demonstrated by their latest approvals, including of biosimilars of etanercept, adalimumab and infliximab. There are also several other companies that have successfully manufactured biosimilars such as Coherus Biosciences and Zydus Cadila, to mentioned a few[ii] 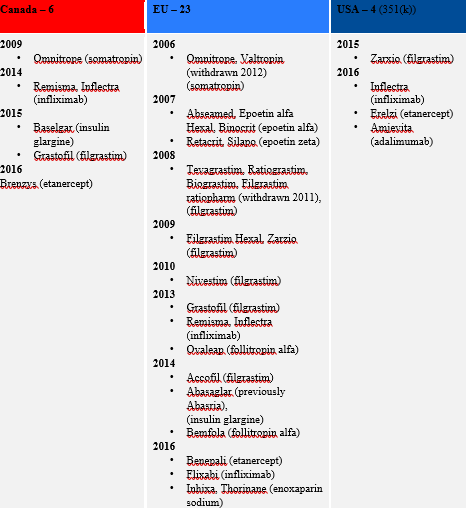 Current Uncertainties in Regulatory Requirements
There has been significant progress in defining the regulatory framework over the last 10 years.  Canada and Europe led the way, with the U.S. still trying to catch up. The EU was the first jurisdiction that introduced an abbreviated licensure pathway for biosimilars under Article 6 Regulation (EC) 726/2004 and Article 10(4) of Directive 2001/83/EC which led the first biosimilar approval in 2006. It was followed by the U.S., where section 351(k) of the Public Health Service Act (PHS) Act as amended by “Biological Price Competition and Innovation Act of 2009” (BPCIA) established an abbreviated pathway for biosimilars, but their first biosimilar approval did not occur until March 2015[i] with the launch delayed until September 2015[ii]. In Canada, interesting to note and contrary to both the EU and the U.S., biosimilars and new drugs are approved under the same Food and Drugs Act and Food and Drug Regulations Part C, Divisions 1, 1A, 2, 4, 5 and 8.

Those regions, like the EU, that have promulgated detailed guidance will encourage sponsors to seek marketing authorisation in their jurisdiction.  Other critical considerations for the selection of region choice include market size, competition, patent expiration, access to the originator product, and reimbursement strategies, to mention a few. 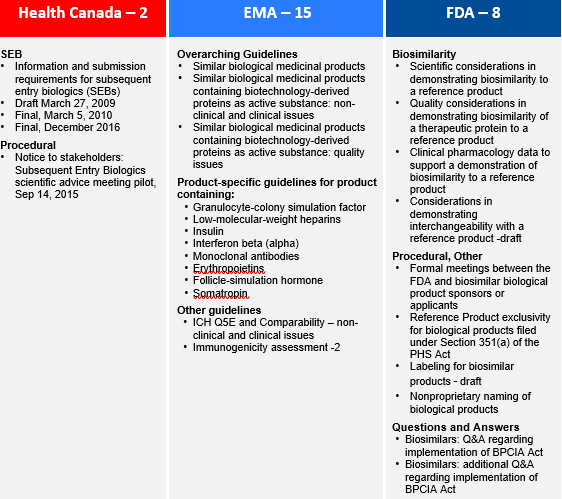 -          Requirements for selection of Reference Product

-          Acceptance of switching or interchangeability of biosimilar and reference product

-          Requirements for post-approval changes in biosimilars

Despite multiple independent studies that demonstrate that switching, including multiple switching, between biosimilar and reference product is safe and has no adverse effects, interchangeability remains unclear when it comes to the substitution and marketing of biosimilars.[i]

EMA doesn’t provide recommendations on interchangeability, leaving this decision to the Health Authorities of individual member states. This approach resulted in a wide spectrum of interchangeability approaches: from full substitution such as in Finland[ii] to not allowing substitution such as Spain[iii], [iv], with all possible approaches in between. Some countries, such as Italy[v], are relaxing biosimilar switching rules in order to address the needs of patients desiring affordable biologics and to reduce their health care expenses.

FDA postponed the issuance of guidance on interchangeability until 2017, despite earlier promises to issue guidance.  Therefore, the only way to get insight into this topic is to meet with the FDA on a case-by-case basis.  Therefore, it is – as yet – unclear how Paragraph 6 of Section 351 (k) of BPCIA will be interpreted and implement for the first biosimilar in the U.S. which obtains interchangeability status[vi].

In line with the EMA approach, Health Canada does not declare interchangeability. It’s up to the individual province to decide. This creates a regulatory obstacle for sponsors during biosimilars registration in provincial formularies.

When it comes to the post-marketing requirements, both EMA and Health Canada declare that after approval, the biosimilar is not linked to the reference product and any change to the product has to be evaluated in accordance with the post-approval guidance documents. This approach sets clear expectations for the sponsors. It also encourages sponsors to apply a “quality-by-design” approach to the development of biosimilar products to ensure compliance with post-approval guidance requirements and reducing post-approval changes.[vii]

The FDA, on the other hand, is working on post-approval guidance for biosimilar products and it is uncertain what these post-approval requirements will be.  This lack of clarity could dissuade sponsors from pursuing biosimilar marketing in the U.S. or even postpone the submission of biosimilar applications to FDA until further clarification on regulatory requirements is available.

Conclusion
The last ten years of biosimilar drug development has resulted in over 30 regulatory approvals in ICH countries, including Canada, EU and the U.S.  The EU is leading the way with the largest number of approvals and the most extensive regulatory guidance, followed by Canada and, lastly, the U.S.  Delays that could have led to more approvals in these regions are a result of multiple factors, including the capital required to conduct biosimilar trials, innovative strategies to delay the acceptance of biosimilars, litigation (especially in the U.S.), and lack of regulatory guidance around substitution.  Another key factor that needs greater clarity includes the acceptance of reference products from different jurisdictions and harmonization of the approach on interchangeability.

FDA Listing of Authorized Generics as of September 30, 2016, last accessed on December 14, 2016: http://www.fda.gov/downloads/AboutFDA/CentersOffices/OfficeofMedicalProductsandTobacco/CDER/UCM183605.pdf